First to implant the revolutionary “disappearing” heart device.
INSTITUT JANTUNG NEGARA, 11 February 2011 - - Institut Jantung Negara (IJN) achieved another medical milestone for the country and became the first centre in Malaysia and South East Asia to implant a new stenting device called “Bioresorbable Vascular Scaffold (BVS)”.   The new technology has the potential to revolutionize the treatment of coronary artery disease – with the prospect for positive therapeutic outcomes resulting from its unique ability to treat a blocked vessel, potentially restore natural vessel function and disappear within approximately two years after implantation 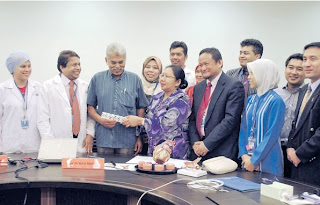 The cardiology team headed by Tan Sri Dr Robaayah Zambahari (CEO/MD) and Dato Dr. Balachandran (Consultant Cardiologist), aided by the team of invasive cardiovascular laboratory staff and the Clinical Research team, performed the initial implant into a patient three days ago.  According to Tan Sri Dr Robaayah, the new BVS device is made of polylactide, a proven biocompatible material that is commonly used in medical implants such as resorbable sutures. Since a permanent metallic implant is not left behind, a patient's vessel treated with BVS may ultimately have the ability to move, flex and pulsate similar to an untreated vessel. Restoration of these naturally occurring vessel functions, or vascular restoration therapy (VRT), is one of the features that makes BVS a significant innovation for patients in the treatment of coronary artery disease. In addition, research indicates that the need to administer long-term dual anti-platelet therapy to patients may be reduced because the temporary scaffold is completely resorbed.
IJN is one of the two heart centre in South East Asia that are involved in the Clinical Trial for the device and IJN has successfully implanted the BVS device on the first patient. Tan Sri Dr Robaayah also briefed the media conference today that the treatment for coronary artery disease has come a long way since the balloon angioplasties, followed by bare metal stents and currently drug-eluting (metallic) stents DES. This revolutionary device, called ABSORB, has the potential to benefit patients even more. It functions as a scaffold; over the next 90 days or so, it elutes the drug, everolimus that prevents cell growth, and over the next months out to 2 years, it slowly dissolves, thereby ‘disappearing’, after completing its functions. The vessel regains its original status and functions. She also added that the device would potentially be even more beneficial to paediatric patients, in whom as the patient grows, the patient would ‘outgrow’ the implants. A metallic implant would require the patient to undergo surgery to remove the implant. But if the implant dissolves away, the child would not require such surgery.
Posted by IJN at 5:51 PM